In February 2016, I traveled with some ReThink Health colleagues to St. Paul Minnesota where Jeanne Ayer, the Assistant Commissioner of the Department of Health, and Dana Farley had convened about ~30 people to talk about the connections between Health and Incarceration. 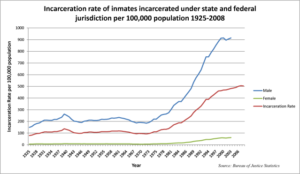 Using a set of group thinking tools to shift the way we usually talk and think about the problems, we listened deeply, reflected, and recorded what we heard. Here is some of what we learned:

Being in prison or jail makes people sick.

In addition to contagious disease, the isolating and often inhumane conditions also cause mental illness including depression and anxiety. There is substantial evidence to support this, including this and related papers. A recent Frontline episode, Solitary Nation, documents the psychologically damaging effects of solitary confinement.

Because the prison population is more likely to be lower-income, and medically underserved, they also tend to be sicker than the general population. Healthcare services are often insufficient in the state and federal prison systems in the county jails systems. So illnesses, both physical and mental, may become worse in these environments. According to the National Research Council, “The incarcerated populations bears a disproportionate burden of many diseases.”   These same people have difficulty accessing healthcare when they are released.

After people are released from prisons, they are sicker, and have barriers to employment and housing.

After people are released from prisons, they are sicker, and more likely abuse drugs and alcohol. This, along with any convicted felon status make it very difficult to find stable employment and housing. Some successful Ban the Box initiatives have focused on these widely used policies the prevent previously incarcerated people from gaining employment and housing. So now only half of the U.S. population is subject to this structural discrimination.

All of these factors make returning to prison a frequent occurrence. Recidivism rates are high for non-violent drug offenses, to some degree because inadequate rehab treatment is available inside and outside the institutions, and also because of needlessly strict parole requirements. Both are policy choices that have been made, and both are areas to rethink.

So if we put just those causal factors affecting the prison population together, this is a picture of what you get. Notice how these factors create circular chains of cause and effect, or feedback loops. As the number of incarcerated people increases, it causes an increase in the negative health effects of incarceration, which causes a decrease (a change in the opposite direction, indicated the “o” by the arrow head) in the health status of the released population. These loops are reinforcing, which means they will cause Incarceration to grow steeply over time. And this is pretty much what we have seen.

Because of the health issues and housing and employment discrimination, incarceration even for non-violent crimes becomes a lifelong sentence.

It’s cruel but not unusual. The system must be changed, and the only way to break reinforcing loops of cause and effect is to break a link or slow the growth of one of the variables.  The green words in the diagram show policy areas that can and should be changed to break these vicious cycles.  Discriminatory housing and employment policies are preventing people from reintegrating after release, so the Ban the Box efforts should be supported and expanded.  It is becoming increasingly clear that lack of healthcare, especially mental health treatment and drug rehabilitation must be addressed.  And at the same time, policing policies, sentencing, and parole policies should be redesigned to support successful re-entry into society. As in many complex problems, the solution will be multi-faceted.

There is more this group in Minnesota covered which I will share in subsequent posts.  But I am curious to hear if any readers have thoughts about this part of the system. I welcome your comments.

Parts II and III of this story are coming soon!