The group also talked about incarceration’s effect on the health of families. It turns out the picture is complicated further by intergenerational effects.

An incarcerated parent increases the likelihood of problems and illness the children. 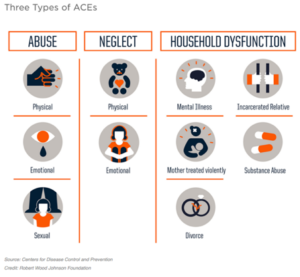 There are really big things going on with youth that are connected to health and incarceration. The first is a not too recent discovery of the long-term effects of Adverse Childhood Experiences, or ACEs. This is game-changing research boils down to this, the rougher your childhood is, the higher your health risk, and the more likely you will adopt unhealthy behaviors, including substance abuse.

Vincent Felitti, the researcher who first published this critical research, identified nine stress-inducing childhood experiences.  Individuals are given one point for each experience they had, and the points are summed for an ACE score. Points are accrued for different types of abuse, neglect, and household dysfunctions. Having an incarcerated parent is one point; having a parent that is depressed is another, and one who abuses alcohol or drugs is another.

So incarceration, which can also give rise to isolation and physical and mental illness, gets passed down to the children through these ACE factors.  The ACEs phenomena is physiological; it is thought that the heightened risks for illness and unhealthy behaviors arise through disrupted neurological development in the early years of a child, and that those lead to social, emotional, and cognitive impairment. 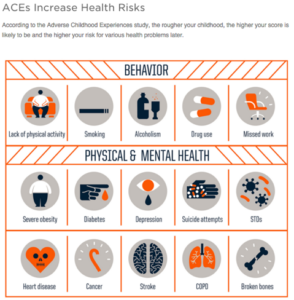 Some of the health problems and unhealthy behaviors that are linked to these adverse childhood experiences include depression, drug use, and alcoholism, each of which increases the ACE score of the next generation.  These and the other elevated risks for chronic disease including diabetes, stroke, heart disease and cancers are part of the costly and growing burden of chronic disease in the Unites States.  So, yes, as incarceration grows, the number of people affected by ACEs grows, and the health burden grows.  Breaking this intergenerational cycle of ACEs would have many benefits.

The second important thing happening with respect to is the increase in likelihood of youth being involved with the justice system.  The way in which the education system handles ACE-stressed youths in lower-income communities, is by cracking down on them, resulting in what has been described as a School to Prison Pipeline.  Youth who socially, emotionally, and cognitively are not able to thrive in the US educational environment, often because of their adverse childhood experiences, get shunted into the juvenile justice systems, adding to another vicious cycle.  The combination of these intergenerational effects is another set of very powerful reinforcing loops that add fuel to an already growing set of problems in the incarceration and health.

If we put the effects of ACEs together with the education system’s punitive reactions to kids who have trouble at school, what we get is traumatized kids showing up at schools whose default is to divert them into the criminal justice system as soon as they show the results of their trauma.  This often leads to their incarceration, increased physical and mental illness, which they bring back to their families, and the ACE cycle continues.  In the causal loop diagram below, we see the circular chains of cause and effect – more reinforcing loops, aka vicious cycles.  (An ‘o’ at the arrowhead indicates an effect in the opposite direction e.g. as youth health decreases, punitive reactions increase.)  These reinforcing loops tend to gain power over time, and causing all things in the loop to grow exponentially. Until something makes them stop by breaking a causal link, or by providing a limit to that growth. 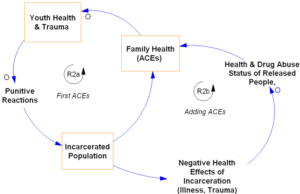 Two promising areas for intervention in this part of the system are 1) choosing different and more effective interventions for youth who having social, emotional and cognitive difficulties at school – not punitive reactions, and 2) medically appropriate treatment for the incarcerated population, to improve their health status, not to exacerbate it.  Of particular importance is effective treatment for addictions and mental illness.  To some degree, people have recognized the implications of the school-to-prison pipeline, and some improvements are being made.  But what remains are stunning inequities for people of color.

Speaking of which, in a rare and courageous move on the part of the Minnesota Department of Health, Racism was on the table when we met in Minnesota.  There is (of course) even more going on than the feedback drivers we identified in Part I and Part II of this series.

Part III in this series can be found here!