This blog is part three in a several part series on Incarceration & Health. Here are links to the two previous blogs in this series:
Part I: A Lifelong Sentence
Part II: Families Repeating Patterns

I welcome your comments. On this topic, I am groping in the dark. As a result, I am probably going to insult some and irritate others. Please forgive me, and do let me know how I can see more clearly.  Thanks, Kris

As mentioned in the previous blogs, in February 2016, I traveled with some colleagues to St. Paul, Minnesota. The Deputy Commissioner of the MN Department of Health had convened about ~30 people to talk about the relationships, the connections between Health and Incarceration, i.e. the system. 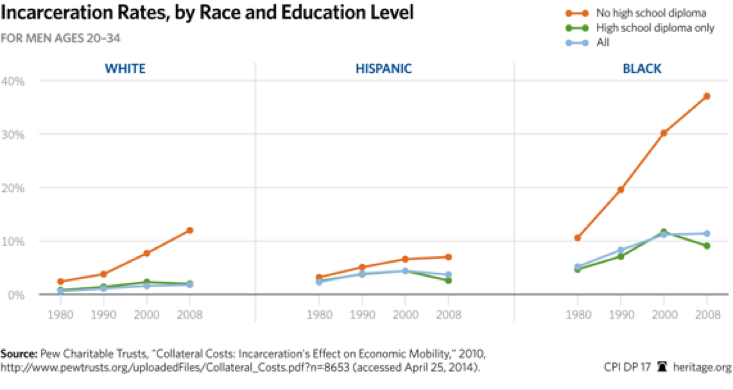 I was intimidated because they were astute, impassioned, and diverse. And we, as facilitators were told that race was on the table. (So often, even when race is on the table for discussion, it is really more like the elephant in the room; it is talked around. But not this time.)

As a white woman, I felt vulnerable and worried about inadvertently insulting someone. I’m aware that I represent  oppressive forces, especially because we were in front to help guide the group through this territory.

And it got interesting, and for some pretty uncomfortable. One of the small groups in the room decided to focus on how racism fit into the picture for incarceration and health. They saw the policies that were enacted from 1970-2000, during the time that incarceration was growing dramatically, as part of a repeating pattern. And they noticed that the results not only prevented many black people from increasing their wealth or political power, but put more and more of them in prison or jail.

A non-dominant narrative Americans should try to hear

One of the working groups in Minnesota laid it out like this. Starting in the 1970s, the threat to white’s political and economic power gave rise to a series of laws and policies that addressed a perceived threat to public safety, and had 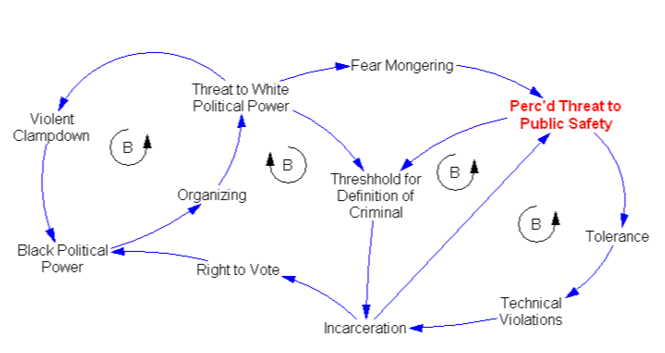 the effect of incarcerating an increasing number of black people, especially young men. People in the group mentioned the War On Drugs initiated by Nixon in 1970 and continued by Reagan, mandatory sentences for drug offenders during the ‘Crack Epidemic’, Three Strikes state policies, and in schools, Zero Tolerance policies. All of which rendered long sentences and fast tracks to prison. Support for these policies was fueled by Dog-Whistle language that 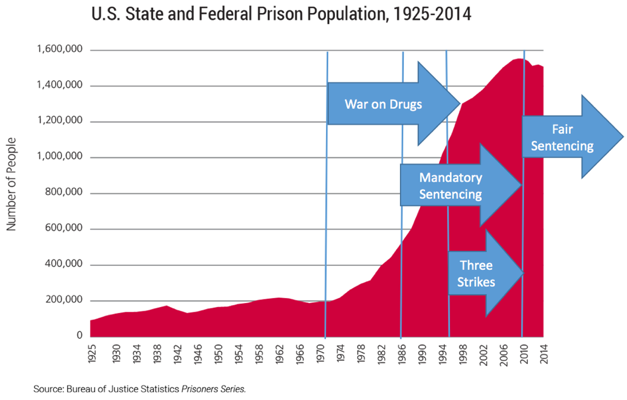 referred to predominantly black subpopulations in coded phrases (e.g. “crack epidemic” or “inner city”), and was reinforced with biased reporting by the media.

The result of the causal relationships articulated by this group would effectively quash organizing of people of color maintaining the economic and political power of whites, while simultaneously feeding whites’ fear of blacks. Notice the several Bs in circles in the causal diagram. Those are balancing feedback loops that work to maintain status quo.

Some in the group referred to this perspective as a non-dominant narrative. Which is accurate, but doesn’t do it justice. It’s not just a story. If we dig deeper there is significant evidence to support this narrative.

Michelle Alexander, author of The New Jim Crow has explored these patterns in depth. She admits her title is provocative, but in her book shows “how historically both our conscious and unconscious biases and anxieties have played out over and over again” in the form of enacted policies. Alexander shows that policing, enforcement, and justice have been applied unevenly to different races. And given the evidence we explored in the two
preceding blogs, Incarceration and Health Part I and Part II, it has put a tremendous number of black people into a system that causes lifelong drawbacks (Part I), making both them and their families profoundly unhealthy (Part II).

Identifying patterns is an important practice in systems thinking. Looking at the historical data allows us to understand what kinds of forces are driving the system. The fast rising number of people incarcerated, especially the number of black men in prisons and jails hint at a system designed to get the results we are seeing, and a system where someone is benefitting.

After the Civil War, black people could no longer be slaves, according to the dominant narrative. But then sharecropping became prevalent, in which landowners fashioned contracts that kept freed black families tied to rented land with little to nothing to show for years of labor. Sound familiar? In addition, the practice 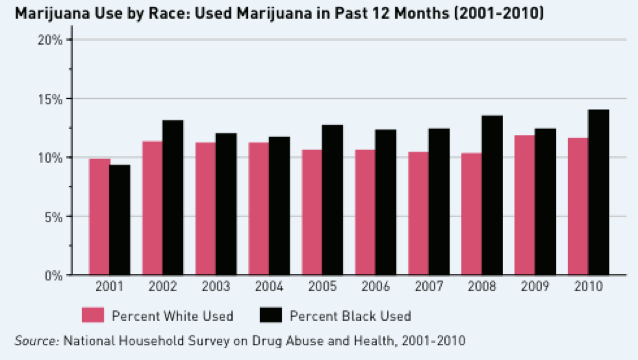 of leasing convicts to land and business owners emerged. This arrangement was based on a public and private partnership, where so-called freed men were imprisoned, and then essentially re-enslaved by the companies who held the leases. An entire set of laws were created to provide a ready source of incarcerated black laborers; they were known as Black Codes. Though it has shifted form, this practice is still in existence today with many well-known corporations benefiting as well as several huge government agencies. We’ll get back to this in Part IV of this series.

Similar to post-Civil War’s Black Codes, since the 70s the US has steadily lowered the threshold for criminal behavior. There are publicly available audio recordings that Nixon said “the blacks are really the problem,” and he devised a battle against drug use the as a corrective action. Reagan followed suit. Laws made drug use and addiction serious and punishable crimes. And the implicit and sometimes explicit target was people of color. In the following 40 years, the War on Drugs, the Crack Epidemic, Zero-Tolerance, and iterations of sentencing guidelines were all applied unevenly, and resulted in putting millions of mostly black Americans in jails and prison across the country. 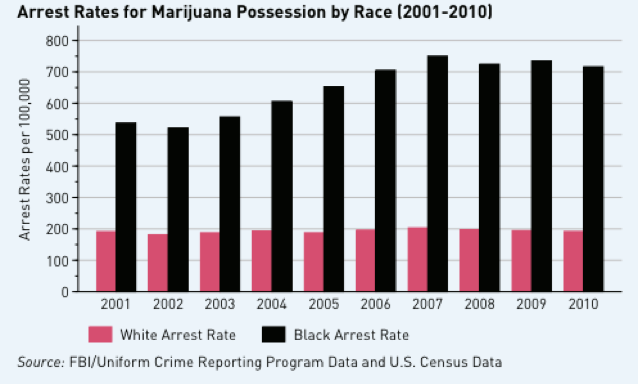 Incarcerated people cannot vote. In some states, people who have ever been convicted of a felony lose the right to vote permanently. The prison population is not counted in unemployment statistics. So a side effect of high levels of incarceration is to decrease unemployed labor supply. Increasing the population that is housed in prisons skews the economic picture, making it seem rosier than it really is. Both contribute to keeping black political and economic power low.

Were all these policies driving inequity in different agencies, over several decades, put in place subconsciously? Not all of them.

Throughout our history, organizing and speaking out for black rights has been met with corrective action, often violent. In 1969, then head of the FBI, J. Edgar Hoover ordered the murder of Black Panther leaders, including a well-spoken leader Fred Hampton. And more recently, the predominant white reaction to the emergence of Black Lives Matter movement is at once threatened and threatening. Again, enforcement and media have a balancing effect, and are by design meant to maintain a goal, in this case, status quo.

Increasing awareness of our personal biases

It is clear that we still hold the remnants of bias in our policies, and in our systems. And – here is a stumbling block for a lot of white people – we hold also these unconscious biases within ourselves. Wherever there is oppression, there is fear of the inevitable transition away from oppression. Enslavers worried about rebellions, which they thwarted with barbaric treatment and wide-spread policing by other whites. Increases in the wealth or power of people of color have always been perceived as threatening. Sometimes the threat might be to real estate values (e.g. the practice of redlining as recommended by the FHA in the case of real estate), or to our ‘good schools’, or to our peace of mind when watching protests on the news. We have a lot to lose. Our system evolved to neutralize these threats, using white fear to sway public perception. Historically, distorted reporting in the media has sustained this. Even today, white suspects are often portrayed using formal pictures while mug shots are used for suspects of color. Of course we have deep racist feelings; we have been fed a steady diet of it since we were children.

To provide a painfully personal example of that internalized fear, one time when traveling alone on business, an African American man slipped into my elevator at the last second. I became so visibly anxious that he introduced himself to me, told me about his job, as an engineer at Hewlett Packard. Clearly it was not the first time he had seen this type of reaction from a white woman. I remember kicking myself mentally. Some have said self-forgiveness is called for. After all, I too have been conditioned since birth to be afraid of People of color, especially black men, and often in the guise of threat to public safety.  That’s another blog in the pipeline. I’ll share insights from conversations and readings that helped me become aware of a perspective very different from my own, one that I didn’t get growing up in a vastly white communities.

It is clear that uneducated people of color have lost ground in our country. No structural analysis is complete in the US without answering the question, “Who is profiting from the status quo?” Who is benefitting?  Incarceration – Part IV is the final installment in this series.

Please comment. This is a learning process, and I have likely made some errors. Please let me know!