Respect – What We Mean

Home NewsRespect – What We Mean

Respect – What We Mean

Respecting the dignity of every human being also means for me that a person’s inherent value has nothing to do with his or her assets, bank accounts, property, color of their skin, race, religion, work, health, or relationships. Indeed, their rights should be identical.

I’ve been thinking about respect lately. I think people have pretty different working definitions. So maybe I’ll share, and you can add your thoughts? I think there are different kinds of respect for me.

I am not talking about deference born of fear. That’s one type of respect I suppose, but one rooted in weakness. For example in reading about the Holocaust experiences of Victor Frankl in his book Man’s Search for Meaning, we can understand that deference to be pragmatic when faced with a situation of imminent death or overwhelming evil.

I am more interested in respect that is rooted in admiration or appreciation.

As a young child I recognized that some people deserved more respect than others. I was a small judge watching all the people around me. In some ways, I have not changed.

Later in life, I leaned into what it meant to be Christian. One of the baptismal vows that is common to almost all denominations is something like this: “I promise to respect the dignity of all human beings.”

Respecting the dignity of every human being – Unearned and absolute

The tenet “respect the dignity of all human beings” is found 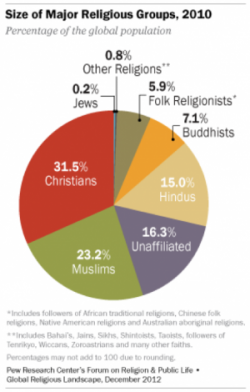 in teachings of Islamism, Buddhism, Hinduism, Judaism, and Christianity. So for those if us in these spiritual practices, we are called to respect every single person on the planet. It turns out that the number of people practicing these religions, about 80% of the people on Earth, are supposedly doing this.

That’s nice. I can just hear Sarah whatsername saying “How’s that respecty dignity thingy working out for ya?” It feels like we’re not seeing as much of it in the world as we used to. We my friends are falling short.

I’m not wading into deep philosophical waters.  But if we take this oath seriously, this spiritual respect means that we value the personhood of every single person in the world, and their right to live their life, as much as we do ours.

This is the basis of law, where each of us has rights and freedoms that are likely to bump up against each other, and therefore must be negotiated fairly, that is equally. The law is, in principle, a set of methods to negotiate fairly. In practice, well that’s another blog.

Respecting the dignity of every human being also means for me that a person’s inherent value has nothing to do with his or her assets, bank accounts, property, color of their skin, race, religion, work, health, or relationships. Indeed, their rights should be identical.

So if we sign up for these religions, this type of respect is afforded to all strangers, from every nation, as well those people we know personally.

There is also a different kind of respect that is earned, a positive regard, admiration. This respect accrues with observed actions and words, and demonstrated competency for their role. It may be due to intellect, education

(knowledge), emotional intelligence, or offering wisdom, beauty, love, or humor in the world.

Like most people, I do admire people who have struggled against life’s challenges, societal challenges, and succeeded.

I respect those who lives reflect virtues, especially more than one.

Here’s the thing. The flip side is also true. Vices such as boastfulness, cruelty, vulgarity, spitefulness, pettiness, dishonesty, excessive ambition, violence, and/or greed, lead me to respect a person less. (No names, please, Don the Con.)

So on the Earned Respect scale, some people can go negative. Those who were born lucky, and choose to display vice are much more likely to earn my disrespect. I do not respect those who regularly deny the essential human dignity of entire groups of people.

I confess. I’ve shown disrespect with not enough kindness. I know I am not alone in feeling frustration lately. 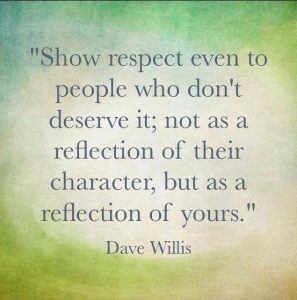 I’ve realized though, I am more likely to take the time to challenge someone who 1) is embodying vices, and 2)

It gets murky, doesn’t it? How can we challenge vice-full behavior while maintaining virtue? Aristotle observed that too much (or too little) of a virtue, becomes a vice, e.g. too much forgiveness can become self-destructive.

Maybe the challenge is to constantly balance several virtues, perhaps only calling people out on established patterns of vice when their actions have damaging effects, as opposed to occasional slip-ups. And doing it in a way that reflects both moderation and justice.

Tell me, what do you think? I’m curious.

As always, we begin again.