Reality – Yours, Mine, or Ours?

Reality – Yours, Mine, or Ours?

We cannot individually grasp the whole of reality, so we need one another to figure it out.

One of the most important things to do now is to learn to listen to one another.

It’s so easy to get rooted in that place where what we individually see, hear, and feel are the one Truth, the whole Truth, and nothing but the Truth.

But there are many things that make that simply impossible.

Our perceptions and understanding are fundamentally limited.

My perceptions are shaped by my life experiences, which started forming in the beginning of my life. I was picking up on social signals from my parents, in school, on the sidewalk, in my home, on the television. And I was building an understanding of THE WAY IT IS.  I used that understanding and those signals to guide my actions in the world.

And so it was for you too.  The tendency is for many of us to assume that our path through life was generally the correct path,

Selecting data to match our beliefs

especially if we were successful.  So we spend our adult years telling anyone who will listen that it is vitally important to spank children when they talk back, but let them run until after dark and drink out of a water hose, so they can become ___________  (productive, decent, patriotic) adults, like us. Or some such lecture. 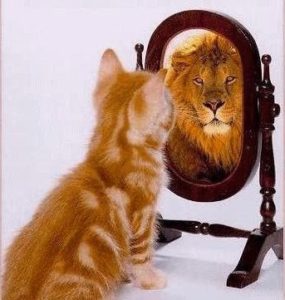 Programmed for confidence and action

Our experiences create biases in our thinking, by virtue of the time (1940 or 2010), place (Harlem or Iowa), culture (NASCAR, class, race, or religion, etc.), and the personal and societal conflicts that provided the context for our growing (The Great Depression or Vietnam War).

These biases seem to be grouped into a couple of areas:

(If you think about it, it’s pretty much what all mammals need to do to survive, so it seems evolutionarily plausible.) The whole area is really quite cool, and the graphic below provides a big picture. 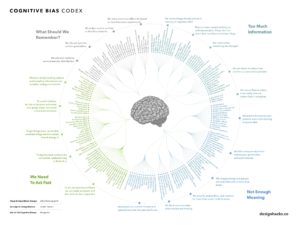 The point is:  Biases in thinking lead to errors in our understanding.

Every single one of us holds assumptions that are dead wrong.  I mean no slight when I say that about you. I doubt any one person can understand everything in the world there is to understand.

It is an invitation to shift our focus to learning, and away from telling.

And it calls for humility.

We are unaware of our biases

So the media, social and otherwise, make good use of our biases.  They push simplifications that are rife with errors, but since they feed our biases they are making us feel good, righteous, and more confident.

There are many people who have been manipulated by their biases to take action against perceived enemies. Their actions in turn reinforce the biases of those around them.  It is safe to say that they are unaware of their biases.  For extremists, their only hope is to have a major life experience that clashes with their narrative. In some cases, those people all of a sudden become aware of their error, and set out in a different direction.

Most people seem to have a vague awareness of the attempted manipulation, but many people are concerned primarily for their own survival and success.  If people perceive a threat, the need to be certain squelches any openness to learning.

There are others, people who have devoted their lives to understanding a corner of reality, rooting out biases within individuals and systems.  Asking “what is really going on?” and then really listening can be a courageous act.  That is what systems thinkers tend to do.

Every single one of us holds assumptions that are dead wrong.

Reality is much bigger than any one of us.

In my systems thinking work, one of the keystone ideas is that of developing a shared understanding.  (Not to be confused with the cognitive bias of assuming we know what others are thinking or saying.)

The situations we are dealing with are gnarly. It’s a mess. It’s a wicked mess.  Even in a tightly scribed focus area, e.g. in an organization, there are many players, from different walks of life, many local incentives, many different goals, and many levels of operation.  And many, many causal relationships among these things.  Widen the scope, and the complexity increases tremendously. 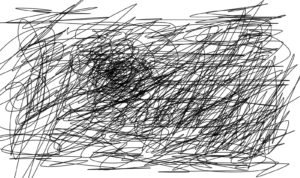 Dealing with this level of complexity is possible.  It’s kind of like eating an elephant.  How, you ask?  One bite at a time. Just kidding. Sort of.

We accomplish this by first listening to one another, and piecing together a picture of what’s going on that that we can agree on.  Have you heard the parable of the Blind Men and the Elephant?

It is an ancient Indian parable (Please suspend judgment, politically correct ones. I said ancient.) about six learned men who could not see at all, but came upon a new creature in their travels.   They approached the large creature from different places to explore it and to understand just what it was.  One feeling the tusks said “It’s like a spear.” Another feeling the side of the creature, wondered what his friend was talking about, said “It’s like a wall.” And another holding the tail, thought his friends were trying to make a fool of him, and said “Obviously, it’s like a rope!”  Each man knew, from his own senses, without a doubt, that he 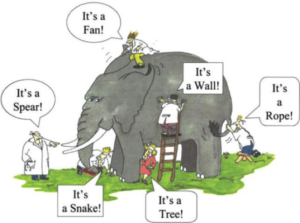 was correct, and argued loudly with the others.  Eventually, the men went away angry with one another, and not knowing what the elephant was at all.

In many ways, we are the blind people!

When we (as citizens, employees, parents) get out bed in the morning and our feet hit the floor, we face complex situations.  We may know some part well, but we must rely on others who understand the other parts.  We cannot individually grasp the whole of reality, so we need one another to figure it out.  It can only be done together. We need to listen and incorporate others’ realities into our own, to come closer to understanding the whole mess.

We need to get into the habit of accepting other people’s description of their experience as true, and valuable to remember.  (Notice I did not say accept others’ conclusions, but rather their personal experiences.)

So we need to go out of our way to hear different narratives, to really listen and to try on what it might have been like to be in someone else’s skin. This can be done initially by reading, to raise our awareness of places where our biases conflict with their reality.  This gives us a little time to work through our discomfort of having become an adult, and being unaware about so much. It is also less frustrating to those who you may be listening to for the first time.

With listening, and accepting knowledge from others who are different from us, it is possible to learn something.

And our life together depends on us doing just that.