Photo by Elaine Casap on Unsplash

Are you a Giver or a Taker?

The structure of a system, even if populated with fair-minded or generous actors can give rise to vast inequalities.

For the last several years, I’ve had the opportunity to work with the gifted faculty who teach leadership at Wharton Business School at the University of Pennsylvania. In particular, I find Adam Grant’s research has wide applicability to life. Grant is a shy and charming fellow, and an author of several insightful books that apply to life as well as corporate and entrepreneurial life.  And he now has a podcast called WorkLife, which can be found here. His idea that has had a spike in relevance for me lately is called Give and Take: A Revolutionary Approach to Success.

Grant lays out his theory of three attitudes individuals tend to have toward other people and transactions; they are either Givers, Takers, or Matchers.  Most people he suggests, are Matchers. Matchers will often help someone out if asked and if they are able, but they keep a sort of mental scorecard in their head, knowing that they can ask that person for a favor in return in the future. Matching behavior can be seen everywhere in the US; we are accustomed to agreeing to this product for that price. And a sense of fairness is often invoked.

There are also Takers. For these folks, the balance of giving and taking is heavier on the taking side.  This is a smaller proportion of all people, who are comfortable taking more than they give. They won’t hesitate to ask people in their network for favor, and have less compunction to return help at a later time. More on Takers later. 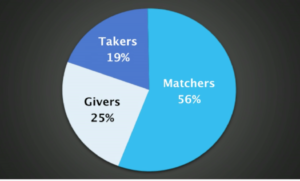 Adam Grant’s estimate of US population

Lastly, there are Givers. These people tend to give more than they take.  Givers are at particular risk of being abused, although, highly effective Givers have usually developed some sort of boundary to protect them from their natural generous instincts. Givers are usually willing to give people the benefit of the doubt, and when in leadership positions, they are often more effective in fostering growth and developing leadership in others in their organizations.

Adam Grant is a Giver. In addition to being an author, he is a teacher, both rather fitting roles for Givers. He has well-crafted practices that keep him from giving all his time and energy to others.  He focuses his favors on making new connections for those who might benefit. I too am a natural Giver, though have over the years learned some boundaries. I tend not to keep score, and can be overly generous, and only rarely have the feeling that I am being taken advantage of. Grant notes, and my experience verifies, that giving has its own reward in happiness, deep relationships, and humility.

I wonder if Systems Thinkers more likely to be Givers, understanding that all our actions are in the context of a larger system, and that one act of generosity can lead to another, and to another?  Is it easier for us to see that the “pay it forward” notion improves the system for all of us? I wonder too – is a difference in the Giver/Taker/Matcher ratio between progressives and conservatives?

Clearly in many areas of business, in the short term, Takers tend to ‘win’, at least in a blunt force kind of way.  Though because they tend to step on and hurt others on the way up the ladder, they leave a wake of people who they’ve burnt.  And those folks share their negative experiences. For instance, it is clear that the current chief federal administrator is an incorrigible Taker. His language is peppered with the word “I” and other references to himself, there is a list of businesses he has jilted after they delivered contracted products and services, and he constantly describes a Win-Lose frame.

Performance-wise though, Grant notes that most Takers tend to stay in the middle of the pack, whereas Givers tend to either be wildly successful, or somewhat unsuccessful. Successful Givers have habits that incorporate self-care, offering people high-leverage help.  High-leverage help is help that 1) can be delivered with relatively little time and effort on the Giver’s part, and 2) creates the possibility of big success and learning. In a leadership role, effective Givers can be very inspiring and energizing to their organizations.

I expect most Systems Thinkers recognize that many systems tend toward matching, with levels of transactions and work supported by resources and revenues. Capitalistic economies are built on the balance of supply and demand, which is all the accumulated business transactions, that match products or services with agreed upon prices.  The culture of capitalism probably informs many people’s “way of the world”, and may be reflected in the higher fraction of Matchers in US society. I wonder if there are differences in the fraction of Givers, Takers, and Matchers in societies structured differently?

The notion of Matching, Giving, and Taking can apply to economic systems as well.  In some of his follow up interviews, Grant talks about how a person’s internal values affect interpersonal interactions, and also organizational activities.  He touts the benefits and challenges of creating a Giving culture in an organization. But as we noted before, a system of capitalism has a strong matching component.  Many Matchers, and some Givers have become tremendously wealthy in the matching capitalistic system in the US. Whenever I have had the opportunity to work with very high level leaders, they are quite earnest, and interested in larger societal issues.  It surprises me that they (mostly men) simultaneously enable and support corporate Taking behavior. 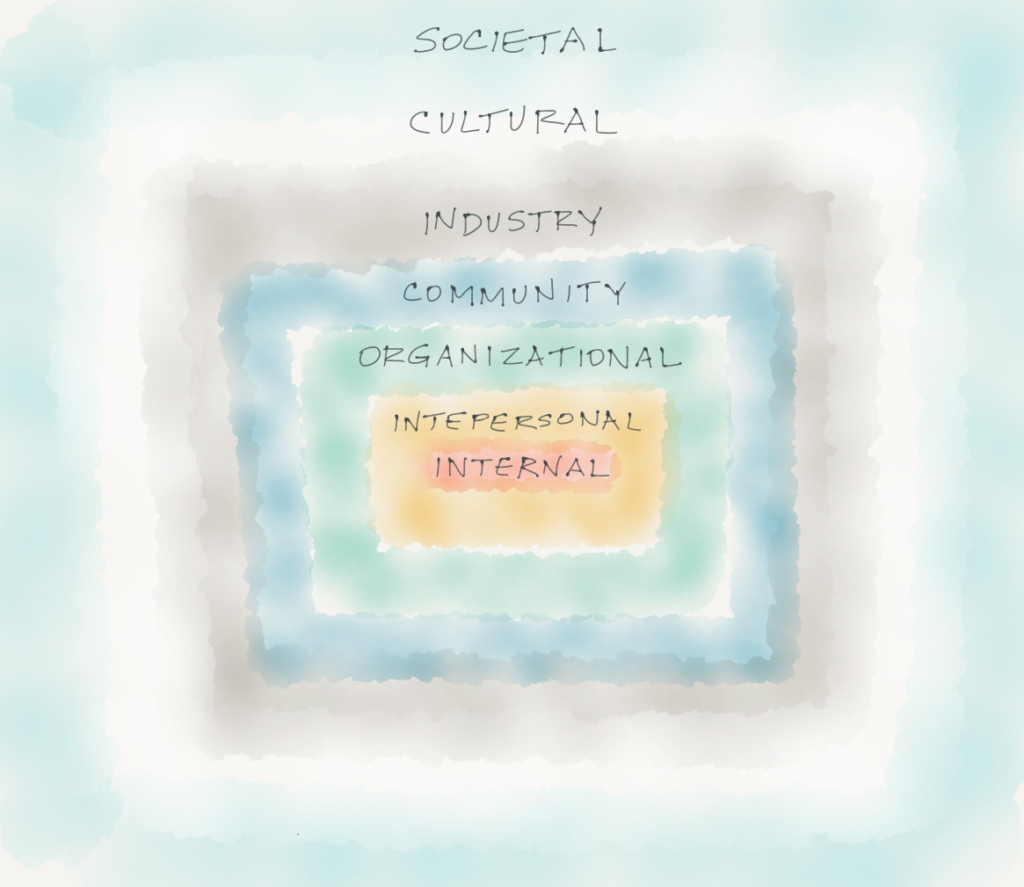 Nested systems in our lives – do they reward Giving, Taking, or Matching?

The structure of a system, even if populated with fair-minded or generous actors can give rise to vast inequalities.

I hesitate to denounce the behavior of all of the 1% of earners as selfish Takers, though it seems that our revered capitalistic system is dominated by a ‘Winner Take All’ dynamic. And given the present inequities in all the economically developed nations, it is a commonly occurring dynamic. So common, it’s been given a name – the Success to the Successful dynamic, which operates continuously in organizations and entire economies to reinforce inequity over time. 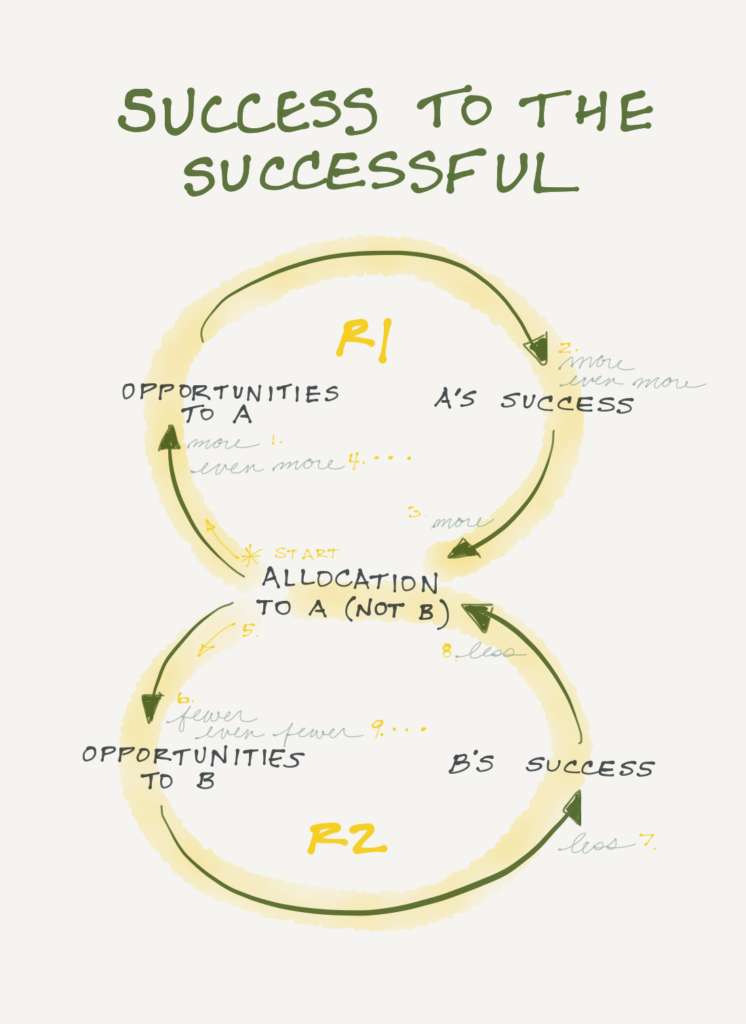 Success to the Successful is a simple and classic dynamic. The story is so common, it was first identified as one of several ‘System Archetypes’ identified by Peter Senge in his book The Fifth Discipline. When there are two or more people competing for fixed opportunities, the one who is unabashed about taking all the opportunities will gain more experience and improve his probability of getting future opportunities. The spoils go to the victor, and thecycle repeats in a reinforcing manner. The counterpart to the successful loop on the top, is that fewer and fewer opportunities are given to the person or people who are NOT forceful Takers, which makes them appear to be a risky bet for future opportunities. So the bottom reinforcing cycle repeats ad naseum too. This dynamic is the source of monopolies, oligopolies, and extreme inequities in wealth, will happen if an unfettered competitive context is allowed to flourish. However, as all systems thinkers know, no reinforcing loop can continue forever.  There is always a limit.

While the individuals in the system may be natural Matchers, the system itself does not offer equal opportunities.  Unless Givers and Matchers are reflective about what is going on around them, they may not even be aware that their collective behavior is actually hurting others.

Have you got questions? Me too.  The gold standard intervention for this dynamic situation is to have those who are deciding who gets the opportunities and the resources, to be more even-handed in their allocation. These reinforcing cycles are tremendously powerful, so this alone is no easy feat. And this solution does nothing to correct for the inequities that have accrued, or to repair past damages.  How could we address those things without creating more problems? Lastly, will real solutions be implemented in time for a peaceable shifts, or will the correction be more violent in nature? If we are going to do this sooner, we need a majority of people to stand up and say “This has got to change,” and to get all our friends to the voting booths to support people who can see these unhealthy patterns.

So, are you a Matcher, a Giver? A Taker?

What about the various systems you live in? What do they reward?

Do you think Takers should be limited with policies?  Should Giving be encouraged?  How? I’m curious.